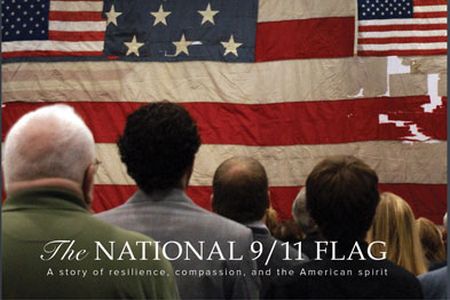 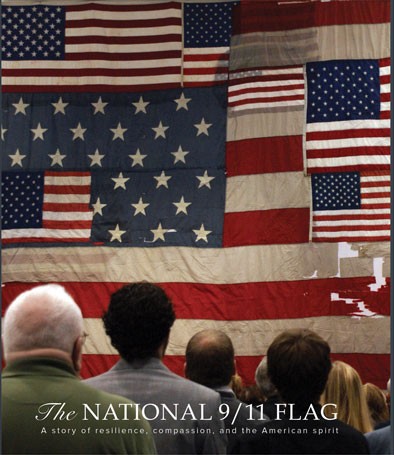 Each year, the National Independent Flag Dealers Association (NIFDA) recognizes an individual or organization who has demonstrated patriotism with the George Washington award.  This year, Jeff Parness from the New York Says Thank You Foundation was given this award because of his efforts in the National 9/11 Flag restoration project.

At the 2015 NIFDA conference, Jeff shared the amazing story of how he started the New York Says Thank You Foundation in 2003 at the suggestion of his 5 year old son, who wanted to help children in San Diego impacted by wildfires. Since many New York residents were so appreciative of the help given to them by people throughout the US and world after the events of September 11, 2001, it was not hard for Jeff to find other New Yorkers who wanted to help Americans impacted by tragedy.

As part of the Foundation’s disaster relief efforts, they became the custodian of the National 9/11 Flag, a 30 foot American flag which had been destroyed in the aftermath of the collapse of the World Trade Center. The flag was rescued from Ground Zero in late October of 2001. The Foundation brought the flag with them to Greensburg, Kansas, where it was first stitched back together by tornado survivors in 2008. Since then, the New York Says Thank You Foundation has taken the flag on a 50 state journey, where over 30,000 people in local communities nationwide helped with the historic privilege of stitching the flag back to its original 13 stripe format using fabric from retired American flags in all 50 states.

Survivors of Hurricane Katrina, the shootings at Fort Hood and Columbine, and the bombing at Oklahoma City, as well as veterans from World War II, Korea, Vietnam, Iraq, and Afghanistan were among the many who helped with this project. Threads from the original Star Spangled Banner and the flag which laid upon President Lincoln when he was shot were also sewn into the fabric of the flag. As Jeff Parness eloquently said, “The National 9/11 flag is living proof that love is stronger than hate.”

The flag is now part of the permanent collection of the National September 11 Memorial & Museum. The New York Says Thank You Foundation now operates five inter-related programs focused on survivor empowerment in disaster relief, education, and the arts. To learn more about the organization, visit newyorksaysthankyou.org.