Last week, we attended the annual National Independent Flag Dealers Association (NIFDA) conference in New Orleans, Louisiana. It was a great opportunity for flag dealers to meet, connect, and network with each other and with flag manufacturers. We found the conference to be educational and inspiring, so we wanted to share a few of the insights we gained and experiences we enjoyed while attending:

The Honor and Remember Flag

Another inspiring moment of the conference was when the NIFDA presented their George Washington award to Jeff Parness for the National 9/11 Flag. This project took a flag which had been destroyed in the World Trade Center attacks on September 11, 2001, and stitched it back together, using the process to connect to people across the country and incorporating a number of other major events in American history into its structure. This is a great demonstration of the profound effect that symbols like flags can have on people, helping us to come together and support each other in remembrance of a great tragedy.

In another interesting session, flag dealers from different parts of the country spoke about the issues surrounding the Confederate Battle Flag, which has come under fire in recent years. Several manufacturers have decides to stop making and selling the flag, while others believe that it does not represent hate and continue to make it available. While A Stars and Stripes Flag Corporation have decided not to continue selling the Confederate Battle Flag, we do understand and respect other people’s position, and this session was a good representation of the wide spectrum of reactions that surround this polarizing issue.

There were several other informative sessions throughout the conference, including a look at how to communicate with and market to different generations, an educational talk about planning for how to handle small businesses when passing them on to family members or business partners, and a fascinating look at vexillology, the study of flags, which stressed the importance of passing on the traditions and meanings of flags so that these important cultural symbols don’t fade away.

The conference closed out with a New Orleans second line parade, in which attendees marched down a street in the French Quarter to the location of the annual NIFDA banquet. While people in a traditional second line parade will twirl parasols or wave handkerchiefs, we kept with the spirit of the conference by waving flags as we marched. It was a bit embarrassing, but ultimately a lot of fun. 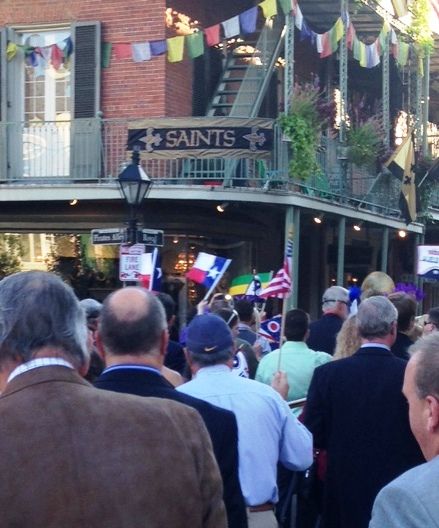 Overall, we found the NIFDA conference to be incredibly valuable and inspiring. It was a great celebration of flags and the meaning they have in our lives, along with plenty of great educational information around the business of selling flags. We’re glad we were able to attend, and we can’t wait for next year!