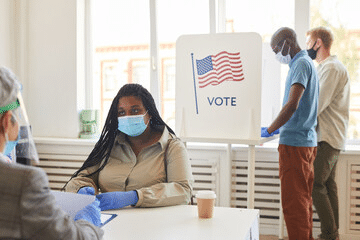 As Election Day quickly approaches, candidates on both sides are making a concerted effort to rally support in hopes of winning their respective seats. There are many ways in which those in and seeking political office and their supporters work towards inspiring the public to vote. One method that individuals utilize to both show their support and rally the support of others is by creating custom flags for their preferred candidates. Not only are custom made flags a great way to get creative this election cycle, but they can also hold essential influential powers as well.

One of the distinct powers of custom made flags is that they can increase name recognition, which is an important facet of securing key votes. Individuals that place flags on their lawn or in any other area outside their house know that flying a flag is very unlikely to completely change people’s opinion regarding the candidate. Local elections tend to differ from Presidential elections in that many may not have inherently strong feelings about a candidate. Many times, the citizens of your town do not have much of an idea who the individuals competing for the seat are. In this case, increasing name recognition is a powerful play by those looking to participate more in politics, and a custom flag could be the first step for an unaware voter to realize the existence of your preferred candidate. This may influence them to do the research that will drive them to vote for your candidate as well.

Related to increasing name recognition, custom flags also can be more memorable than the ones that are flown by every supporter. Flags that are memorable and feature an attractive design that is not overused can stick with the individuals that view them much easier. In local elections especially, supporters often need to be a little bit more dedicated to drive home the relevancy of their candidate. When those that are passing by see a custom flag that is well-designed and obviously not cookie-cutter, the dedication and creativity of the person flying it speaks volumes. In elections, we want to support candidates that people want to go the extra mile for. The reasoning being that, if people are willing to put in a concerted effort for their candidate, their candidate must be one that is willing to put that level of effort into.

Custom flags are just one way to show support of your preferred candidate, but they stand out amongst other methods in part due to the ease of using the approach. When people notice custom made flags that stands out amongst others and is in support of a contender in the local election, it starts a conversation without the need for an actual dialogue between the participants. The conversation that your custom flag starts for its viewers may even help lead to your candidate establishing themselves as a true leader by November 3rd.