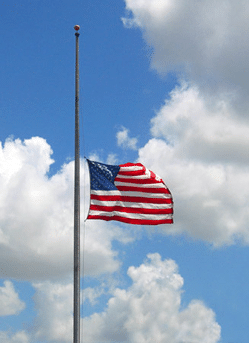 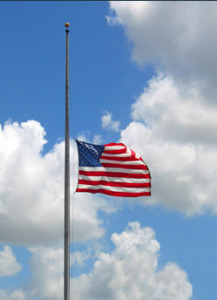 Memorial Day is a major United States Holiday, recognizing the people who have died in service to their country. As an important symbol of our country, the United States flag plays a large part in Memorial Day celebrations. Let’s take a look at the history of Memorial Day, how the flag should be flown on this holiday, and events taking place on Memorial Day.

Memorial Day is celebrated in the United States on the last Monday in May. While versions of the holiday (sometimes called Decoration Day) have been celebrated ever since the Civil War, it became an official federal holiday in 1971. In 2000, Congress established the National Moment of Remembrance, asking people to pause for a moment of silence and respect at 3:00 pm on Memorial Day.

On Memorial Day, people often visit cemeteries to honor people who have died in military service, and many cities hold parades. As the unofficial beginning of the summer season, it is often a time for family and friends to gather for shared meals and activities.

Flying the Flag on Memorial Day

On Memorial Day, the United States flag should first be raised to the top of the staff, then lowered to half-staff until noon, after which it should be raised to full-staff for the rest of the day. This not only recognizes those who have died for their country, but also honors those who still serve.

Do you need a flag?

If you’re interested in purchasing a flag to fly on Memorial Day, please visit our pages for American Flags and Armed Forces/POW-MIA Flags. If you have any other questions about flags, please contact us.